In places where prostitution is fully illegal, this house would fine the individual that pays for the service rather than the sex worker 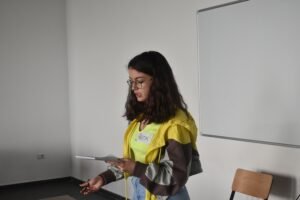 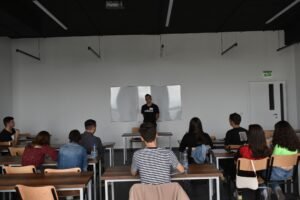 The debate was held in the British Parliamentary (BP) format, with beginner and intermediate level debaters.

The Opening Government (OG) defined the topic in terms of nonconsensual prostitution that happens through trafficking rings. The team proved their first point with statistics that show that in large-scale prostitution is done involuntarily, therefore it would be unfair for the sex workers to be punished by law, when in fact they are victims of abuse. Their second argument was based on an “economical theory” that when the demand decreases, the offer will go down as well.

The Opening Opposition (OO) redefined the topic for the debate, by stating that nonconsensual sexual activities fall under the scope of rape and abuse, while in fact, this debate should be analyzed and debated on consensual prostitution. They rebutted the OGs “economical theory” by stating that if the provider of the service is not threatened by the force of law, the law that forbids prostitution will prove to be useless. Moreover, the team stated the “status quo” by saying that prostitution is indeed the “oldest profession” that has persisted through the ages, and therefore it will need to be tackled from both sides- provider and buyer of the product.

Their second argument was based on the fact that prostitution is not a “two-people” activity, but rather part of a larger-scale organization, in which prostitutes are hired in. For that reason, all people engaged in the activity and sex workers should also be punished by law, in order to gain control of prostitution. The OO proposed rehabilitation for previous sex workers, because of the psychological consequences of their activities.

The Closing Government (CG) supported the OGs arguments of nonconsensual prostitution, but also added to the debate by mentioning minors (under 18-year-old individuals) who are sold into sex trafficking rings. They stated that these sex workers should not be punished by law, but rather those who pay for these services, since children are not legally allowed to be persecuted, and are not able to take conscious decisions in these cases. Furthermore, the team elaborated a concrete plan for decreasing prostitution rates in the country; offering regular pay and rehabilitation for sex workers, if they decide to stop engaging in prostitution.

The Closing Opposition (CO) mainly agreed with the OOs points, but also proposed that brothels and similar bars where prostitution happens should be penalized and closed, in order to get to the root of “the prostitution problem”. The second speaker (the whip), summarized the whole debate and focused on highlighting how the Opposition, and specifically the Closing Opposition (CO), was more successful in proving their points. In addition, the CO was the first team that specified that sex workers can also be of the male gender, and not necessarily only women, therefore giving a broader perspective on the issue.

The judge when providing the feedback explained to the government teams that they should not have differentiated sex workers that are forced into prostitution because it would be difficult to prove the motive of why an individual becomes a sex worker. For this reason, the debate should’ve been more about which side of the parliament would provide better reasons for protecting sex workers.

Moreover, the judge provided feedback on the way that motions should be analyzed. In this regard, the judge told the participants that always at the beginning they should focus on positive narratives, the things that both teams could agree on. These would be but are not limited to: (1) that prostitution is fully illegal but still occurring, (2) regardless of whether it would be the model of the government teams or the opposition teams, prostitution would not stop, and (3) both teams want to better protect the sex workers. Only after agreeing to these terms, teams could fully participate in the debate.